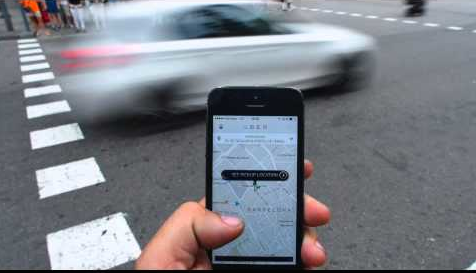 The BP garage parking lot at Cape Town International Airport has space for more than 60 cars. It is full from before dawn until midnight all weekend, but not with customers. Motorists seldom need to queue for the station’s ten petrol pumps. The Express convenience store, with its bright-lit Wild Bean Café counter, rarely has more than five clients inside at a time.

Out in the lot, tucked against a scrubby road verge, drivers lean against their vehicles — polished Toyota Corollas, Hyundai Accents, Honda Accords — or rest with their doors open and seats reclined; when it rains they shut the doors and their windows mist up. A BP security guard with a badge and clipboard paces the tarmac, monitoring how long each driver has been parked. Until the guard tells them to move, or until their smartphones chime like slot machines, or until the late flights arrive and the airport empties, the drivers do not leave.

On a recent Sunday morning, Arthur*, a 29 year-old immigrant from the Democratic Republic of Congo (DRC), sat at a table inside the store, eating fries drenched in mayonnaise. His eyes were bloodshot after less than two hours sleep, and less than two hours the night before — the naps he’d snatched between trips, hunched up in his rented vehicle, amounted to perhaps three additional hours each day. His phone, lying face-up on the table beside him, displayed a map of the airport with a countdown clock. The waiting time until his next ride, it indicated, was “60+” minutes.

“We have no choice,” he said, watching the screen. “We have to sit here and wait. We have to work these crazy hours to bring in enough money.”

An Uber driver like the rest of the men in the parking lot, Arthur had woken at 3 am that Friday and arrived at the airport an hour later, his usual strategy on weekends. Squeezed by lower rates and sluggish off-season demand, Cape Town drivers target the airport because it practically guarantees long rides back to the city. Shortly before midnight, after 18 hours online and only four trips — worth less than R600 in total, before deductions — Arthur left the airport and drove to town, where he ferried clients from Long Street, Kloof, and Bree. He arrived home in Mowbray, where he currently lives with his mother and siblings, at 4 am; he doesn’t recall what time he woke up.

“When you’re that tired you don’t keep track,” he said. “You just wash, eat, sleep.”

He was back at the airport for another 20-hour shift by 7 am on Saturday, remaining online until three the next morning. It was approaching noon when I met him on Sunday; he’d been working for seven hours. He said he was “feeling fine.”

Records from Arthur’s driver app reveal that he worked a total of almost 95 hours that week, grossing R4,625. From this figure, Uber subtracted its standard 20% cut, equal to R925. Arthur paid R2,500 towards car rental. He estimates his fuel cost him another R1,000. Mobile data, essential for running the app, cost R100. He also paid to have the car washed and vacuumed three times — it is important to keep Uber vehicles spotless to ensure good ratings from clients — at R75 a service.

In all, he spent approximately R125 more than he earned that week, working an average of 13.5 hours for seven consecutive days.

Uber has improved transport options, especially for middle-class and high-earning working class people in the city. Marcus Low has described on GroundUp how much better the service is than metered taxis. But in a country with chronic unemployment and stark income inequality, the service carries hidden costs.

Uber’s website pitches a good deal to prospective drivers. “Earn money on your own terms,” it states. “Full-time and part-time driving jobs for independent contractors in Cape Town give you the flexibility to work as much or as little as you want.”

A sign-up page invites drivers to “Make good money. Drive when you want. No office, no boss.”

But while some Uber drivers in Cape Town have had positive experiences with the app, which launched nationally in August 2013, the majority do not come close to achieving the company’s advertised lifestyle and income targets, GroundUp can report, after more than 30 interviews with drivers — especially since Uber South Africa (SA) unilaterally dropped its per-kilometer rate from R7 to R6 in April this year.

In South Africa, unlike many countries worldwide, most Uber drivers work for ‘partners’, or investors able to finance new cars. Some Cape Town partner firms own and operate fleets of more than 50 vehicles each. Splitting their earnings with their ‘employers’ — a contested term when it comes to Uber, but applied here to partners — these drivers often earn considerably less than R1,000 a week, working long hours overtime.

“The system isn’t working for us,” said Karabo*, a young South African driver. “It’s good for the company and for clients. It makes sense for partners with money. If you invest in a car it will keep generating income. You’ll have a nice balance sheet, and be able to apply for bigger loans. But with current prices and demand many drivers are struggling to survive.”

Uber SA spokesperson Samantha Allenberg could not confirm how many drivers were currently using the app in Cape Town, nor what percentage of these drivers were working for partners.

“Driver-partners are self employed and as such have the flexibility to work when they choose,” she said.

Allenberg said that Uber had “enabled over 4,000 economic opportunities” in South Africa. Uber currently offers services in Cape Town, Durban, Port Elizabeth, and Johannesburg / Pretoria. Drivers interviewed for this article estimated that there were currently between 2,000 and 3,500 cars operating in the Cape Town area, which includes Bloubergstrand, Paarl, Franschoek, Stellenbosch, and Somerset West.

Though dissatisfaction is widespread, not all drivers are unhappy with their current situation. Waiting for his next client in the BP parking lot, Claude*, a thickset Burundian man resident in South Africa for over a decade, said that he “appreciated the opportunity” Uber offered him.

“Every job has its challenges,” he said, waving away objections from other drivers. “I used to work as a security guard. I worked 12 hours a day, 30 days a month, for R4,000. With Uber I’ve improved my standard of living.”

The company didn’t force him to work long hours, he said. “We’re human; we want to earn more money. That’s why we work so much overtime.”

He added that he slept in the car (a partner’s) every weekend — “Like a cockroach, getting cold; it beats you; you get so tired” — and commonly drove 24-hour shifts to support his wife and eight children.

“But if the price was better you wouldn’t have to drive so much,” argued a Zimbabwean driver listening in on the interview. “You say Uber doesn’t force us to work these hours, but we don’t have any choice. Now you’re working so hard for such little money, not sleeping, and risking the lives of your passengers.”

A WhatsApp group formed by Uber drivers attempting to form a workers’ union includes shared photographs of recent accidents involving Uber drivers. The group currently has more than 200 members. Karabo, the young South African driver, is a member of the group’s steering committee.

“Accidents are much more frequent now due to driver fatigue,” he said.

Responding to written questions, Uber SA’s Samantha Allenberg said that the company “strictly monitored” drivers’ hours and had “robust processes in place” to prevent drivers from working when tired.

These processes include “monitoring working patterns to ensure that a driver doesn’t work for too long consecutively, or for excessive hours in a given week,” and “reviewing real-time customer feedback … that might flag any issues with a driver’s driving.”

Allenberg declined to answer whether Uber SA kept a record of accidents involving its drivers, or whether these accidents had increased in Cape Town over the last 12 months.

Uber SA does not recognize any form of collective driver representation, instead dealing with drivers on a one-to-one basis. In keeping with the company’s increasingly criticised international policy, local drivers are classified as subcontractors, not employees. This means they are denied rights to minimum wages, paid overtime, or compensation.

With a “very high” proportion of Uber drivers in Cape Town hailing from other African countries — Zimbabwe, the DRC, Rwanda, Burundi, Somalia —  a major obstacle to forming a union has been “low education and exposure to worker’s rights”, Karabo said.

“Many of these guys have never worked a formal job before,” he said. “They don’t know that they are protected. They’re willing to work for almost nothing. When we talk to them about standing together, or about getting Uber to treat us better, they just say that they need to put food on the table, and that they’d rather keep working.”

The trouble with Cape Town

The BP security guard is stricter during the week, and only allows Uber drivers to park for 15 minutes at a time. He records car registration numbers on his clipboard. If drivers spend money in the shop, he lets them stay longer. But drivers keep congregating at the airport because airport trips typically gross R120 or more — “not these joke trips you get in town,” Karabo said.

“Cape Town is a small city. It isn’t like Joburg, where I come from. Here, you seldom get a ride further than Claremont. You end up using too much petrol. I’ve tried many strategies, but now I’m just sticking to the airport.”

A short distance from the BP garage, wedged between the container yards and warehouses of Airport Industria, more than 80 Uber drivers are gathered in a dusty lot owned by a freight company. Gospel music blares as they polish their cars. A woman sells pap with spinach. The drivers, as per Uber requirements, are neatly dressed.

“Often we wait four hours for a trip here,” says Jonathan*, from Zimbabwe. “At R6 a kilometer we’re lucky to take home R700 in a week.”

He opens the trunk of his car (a partner’s) to show me a blanket and small rucksack. “My change of clothes is in there, and a toothbrush. You must be prepared to sleep on the road.”

“It makes us very angry,” says Kenneth, another Zimbabwean, who was online for 108 hours last week. “Uber doesn’t listen. They’re killing us.”

Samantha Allenberg told GroundUp that price cuts were “designed to help drivers” by boosting demand. She added that Uber would be reviewing its price cuts in coming weeks.

“If cuts don’t pan out the way we expected them to for drivers, we’ll reassess.”

Last week’s announcement that Uber drivers will soon be accepting cash payments for rides — raising fear among drivers that this will cause conflict with the minibus taxi industry — was in part motivated by an underwhelming response to the fare decrease, according to company communication.

“As part of the fare reduction experiment we have seen a huge number of people signing up but unable to take a ride because their cards do not work,” states an email asking drivers to attend compulsory training sessions last week. (Drivers who did not attend were threatened with disconnection from the app.)

Arthur, from the DRC, told GroundUp that most struggling drivers came from “trouble countries like Zimbabwe and Congo” and had no option but to accept Uber’s terms.

“But the worst thing is when customers ask how things are going, or what I think of these price cuts,” he said, setting his fries aside. “Some of them listen, but others tell me that’s how the world works, that if I don’t like Uber I should quit. They tell me people work for much less money in China. Who can you speak to? I’m telling you. Nobody cares.”

This piece is published courtesy of GroundUp