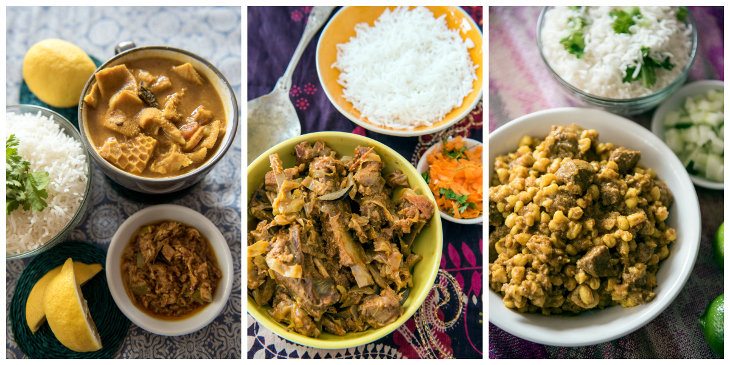 Why is it that the mere aroma of certain foods can take us straight back to a particular place and point in time? It’s because the nose knows the true meaning of nostalgia, and it leads us on a journey through sense into the magic of a relived memory.

There’s a curl of smoke rising from the cast-iron thava. A spoonful of ghee hisses in protest as it glides onto the red-hot pan, releasing the aroma of roasting nuts and sweet, buttery caramel.

In a flash, my mother slides the first delicate roti onto the thava, deftly rotating it with the fingers of her right hand, flipping it over once the bread starts to bubble, rising like a balloon from the heat.

Once on its back it lifts up again, before snuggling onto the black surface of the thava. She tucks the fresh brown-speckled roti onto a plate near the stove and covers it with a clean tea towel before ladling more ghee onto the pan.

The first roti is mine. This is our unspoken agreement, Ma’s and mine. I snatch it from under the striped towel and toss it – still too hot – between my hands. “Careful!” she scolds, her eyes not moving from the pan.

The aroma of ghee or butter melting on a hot pan tends to take me to this place – my mother’s kitchen in Pietermaritzburg, on the days we didn’t have bread in the house when she’d make a stack of rotis, or in my father’s words: “hand-made bread”.

To some extent, it is my Proustian Madeleine – the small, scalloped cake Proust speaks about in Swann’s Way, the first volume of In Search of Lost Time, which when tasted, takes him to a particular moment in his childhood.

I’m about seven, with tight braids and long, gangly legs, standing around my mother as she flips rotis until a large stack appears

In mine, I’m about seven, with tight braids and long, gangly legs, standing around my mother as she flips rotis until a large stack appears, the sweet scent of sizzling ghee hanging thickly in the humid kitchen.

This is known as affective memory, which is different to conventional memory. With the former, the senses: taste, smell, touch, hearing and sight create an almost immediate and powerful experience of the past. With the latter, you need to conjure up the recollection.

The most powerful of all senses in recounting memory may be smell. The olfactory bulb is situated very close to the hippocampus in the brain, the region where long-term, declarative memories are formed. It’s also close to the insular cortex, connected to the amygdala, the place where emotional learning takes place in the brain.

This has been useful to our survival as a species – don’t eat that berry, or face the consequences, for example.

It is the sense of smell that rounds out the five basic human “tastes”: salty, sweet, sour, bitter and umami (savoury) and is most likely the one to evoke memories from long ago.

I recall a particular perfume – Calvin Klein’s CK One (oh, hello late 90s!) that reminds me of Saturday nights in the dorm I stayed in during my first year of university, with all the girls preening for a big night out.

Similarly, the whiff of Nesquik-pink ice cream in the Neapolitan trio, which I disliked then and still do now, takes me back to the freezer in the scullery where it was stored, the cheap wafer cones the aunts would scoop it into and us cousins eating it outside in the garden in summer.

I ate the chocolate and vanilla and chucked the sickly strawberry ice cream behind the shrubs. Spicy mango pickles, with their scent of vinegar and pickling masala, no matter the quality, take me to the large plastic bottles of handmade pickles soaking in my grandmother’s cramped kitchen in Merebank, the tiled floor slightly gritty under my bare feet.

I’m working on a project that has me visiting cooks in homes across the country. It is intriguing, and immensely satisfying, listening to them recount the tastes of their childhoods –many with such conviction, that I, too, can smell the perfume of vanilla filling the house as the birthday cake rises, or the distinctive aroma of cumin seeds popping in hot oil. Many of the recipes they choose to share with me are the well-loved favourites from childhood.

After all, who can fight the nostalgia, transported by the tastes and fragrances of the food of our youth?

This article first appeared on the Change Exchange, an online platform by BrightRock, provider of the first-ever life insurance that changes as your life changes. The opinions expressed in this piece are the writer’s own and don’t necessarily reflect the views of BrightRock.

Ishay Govender-Ypma is a freelance travel and food writer, a former lawyer and keen advocate for various social justice issues. Selected as one of the Mail & Guardian's top young South Africans (2014) for contributions to media, she's often on the road, gathering stories, ingredients and second-hand books that threaten to take-over her home. View all posts by Ishay Govender-Ypma →