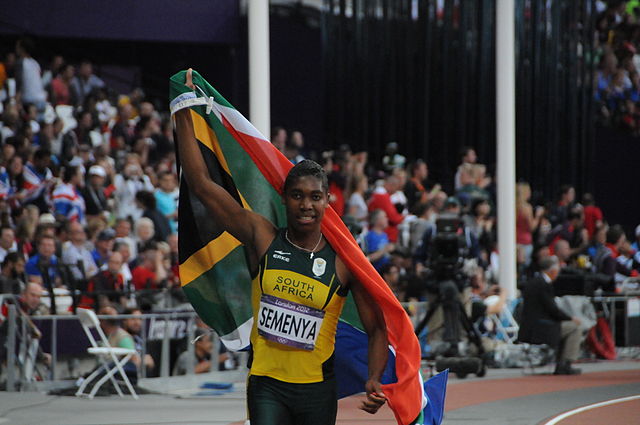 With all of South Africa locked in euphoria and celebrating the dazzling achievements of Caster Semenya, we can easily forget, hide away from, even, the black sportswoman’s struggle in this country.

It is an inherited struggle to be funded, supported and acknowledged by administrators in South Africa.

The one night of Olympic sparkle, when Semenya achieved the magical feat of becoming her country’s first black woman Olympic champion, easily puts temporary erasure on the struggling environment of SA’s black women athletes and coaches, in all sporting codes.

SA’s sportswomen are given serial bad deals within their federations. They sometimes having to personally pay for their costs to participate internationally and with the non-formation of national professional leagues, are forced to compete locally in amateur conditions. Then they also overlooked by potential corporate sponsors, whom they support big time as consumers. The commercial mainstream media is notorious for ignoring South African sportswomen.

Given the historical oppression and continuing structural wealth inequalities in SA, it’s the black woman in sport that suffers most — confronting all the struggles associated with being black and woman, especially black working class. White sportswomen still manage to come through, get selected and perform remarkably.

The athletics prowess of talented black woman athlete Caster Semenya powerfully illuminates what a phenomenal achievement it is when black women excel on the sports fields and tracks.

At the same time, we are reminded of the neglected, unsupported, under-resourced and barely funded black women in sports such as women’s football, rugby and softball teams. Or the appearance of a few black women, here and there, in the national hockey, swimming and netball teams.

The emergence of SA’s first black woman Olympic champion has taken some time, but thankfully it has arrived. Just about every South African showed up for this global achievement by a black woman athlete. Yet, it’s the very same media and corporates, now celebrating Semenya, that marginalise black women in sport by not giving them the support they should be giving from their profits.

But, one black woman Olympic champion doesn’t mean that SA has plentiful elite black sportswomen, who are mostly world class or have high international rankings.

Yes, we have talent but it’s a struggle for them to become world class. We must ask why are there not more black sportswomen exhibiting their sports talent on the world’s sports stages?

What are the constraints on black sportswomen’s emergence as national and continental champions and medalists and world-class sportswomen?

Much of the development of black women in sport in SA must be contextualised within the race-gender binary and class paradigm that black women occupy.

Black women in sport are mostly working-class, a small amount middle-class and professional. The state of affairs in organised sport is that plentiful opportunities for black girls’ participation in sport at grassroots and community stages have been created and opened up. But it’s the ongoing and advanced development of the black girl and black women in sport that’s hardly supported, rather, neglected much more.

Look at the player and athlete profiles. Where are the black women and black coaches in national teams of hockey, athletics, netball, triathlon, swimming, tennis, golf? And when black women dominate national representation in football and rugby and get to represent in cricket and boxing, they are not given adequate funding and support to succeed and achieve internationally.

What is this support that I’m talking about? It’s the assistance which all elite athletes require which allows them to concentrate on training and to be in their sport full-time and professionally without having to find day jobs work baggage or manage the hustle of finding ongoing funding to keep them going.

It’s the support given to emerging elite athletes to compete regularly in international competition so they can measure their abilities, know their potential and improve performance. Most importantly, a black sportswoman’s talent must not be dismissed by white coaches who fail to recognise black talent through their ‘merit is white’ lens.

South Africa chanted in unison in our support for our black woman champion Caster Semenya. We stood together as one nation in our Caster chorus. To the outside world this appears as if we support our sportswomen, especially our black women in sport.

Breaking it down you see how elite black women are missing, how they struggle to participate in sport because their participation in organised sport is not backed up in their federations; no national leagues in softball, football and other sports, some sort of limited national league competition in netball, hockey.

And then it’s about the access to opportunities in many sports which concentrate on their player-base coming out of well-funded suburban and private schools while girls from township schools and working class communities are overlooked, because invariably the ‘merit is white’ lens says they ‘don’t have the technique’ for advanced development to get them selected to represent internationally.

In several Olympic sports like swimming, netball, hockey, golf and tennis, whiteness and white domination of player representation must be disrupted by volleys of provocations, interventions and challenges. We must do this if we want our black sportswomen to break through.

While we are together in celebrating the athletics feats of a black woman Caster, we don’t have white people calling out the racial and gender imbalances in SA sport.

White people speak out for white sportswomen but never do we hear them call out the neglect of black women in sport. Whiteness never speaks out for those marginalised and under-funded and struggling, but whiteness will speak for ‘merit in sport’ — which for them entails white sports prowess while black sportswomen remain trapped in perpetual ‘development’ cages which never lets them out.

We’ve got to arrest this neglect of elite black sportswomen and black women coaches, implement a sustained national plan of support, encouragement and funding and create opportunities for black women to break through.

Failure to do this only allows for more struggle and suffering and will see South Africa continuing to waste black sportswomen talent, which will eventually wither and die.

Roberts started playing sport as a teenage girl in a working class family in apartheid South Africa. Over the past thirty years she has spoken, written and published widely on the gender inequalities, issues, challenges, good moments, memories and the current state of South African sport. Roberts studied at the Universities of Natal (Howard College), University of Cape Town and University of York (England), graduating in various subjects with an emphasis on African government and politics. Roberts played non-racial anti-apartheid under the South African Council on Sport (SACOS) and National Sports Council (NSC) and is involved in sport at all levels – from club level to national level, as a table tennis player, administrator, coach, anti-apartheid sport activist, campaigner for non-racial sport and gender equity in sport. View all posts by Cheryl Roberts →