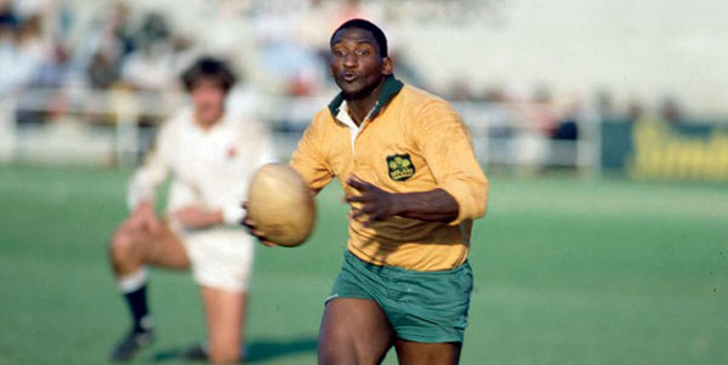 As debates about transformation in South African rugby rage, it is perhaps appropriate to recognize that last month’s incoming Ireland tour represented a significant anniversary in South African sport and a landmark in the country’s rugby history. In May and June 1981, when South Africa found itself a global sporting pariah because of the country’s apartheid policies, the Irish national rugby team toured South Africa, playing a series of matches, including two tests. Taking his place on the Springboks was Errol Tobias, a flyhalf and centre from Caledon in the Western Cape and the first black rugby player to don South African colours.

Tobias, a product of the (Coloured) South African Rugby Football Federation (SARFF), a body borne of apartheid sport, had excelled at all levels of the game, earning his first international appearance in a putatively non-racial side when he played for the 1979 Barbarians tour of England. The Barbarians were an invitational club established in the early 1960s and the 1979 incarnation was engineered to be a multiracial affair that may have helped to convince some within the white power structure in South Africa that mixed rugby was viable.

Tobias followed the Barbarians tour by becoming the first black player in the Currie Cup, in which he starred for Boland. He and Charles Williams then became the first black junior Springboks. At each stop Tobias excelled with his aggressive, attacking style of play. Tobias caught the eye of a few in the Springbok hierarchy, including Danie “Doc” Craven, the doyen of South African rugby. Craven had undergone a personal transformation, going from believing that there would never be a black Springbok to realizing that South Africa would forever be in the sporting wilderness without significant changes. This confluence of Tobias’ own performances and the self-interest of white rugby officials resulted in Tobias’ selection for the 1980 tour of South America, although he did not earn a test cap.

His on-field debut would have to wait until the following year when Ireland visited, over the objections of many in their home country who opposed such clear collaboration with apartheid sport. Because of the intensity of the protests against the tour, the Irish traveling squad had to leave their country incognito, gathering in London in order to depart as a group. The Irish Independent in 2013 called the tour “the sleaziest, grubbiest, nastiest tale in the history of Irish sport”.

Tobias would make his on-field debut in Springbok colours against Ireland at Cape Town’s Newlands Stadium on 30 May 1981. Because South Africa allowed the visiting Irish to choose their preferred green kit, Tobias first appeared wearing a white jersey and not the traditional Bok green and gold. He played centre, replacing the injured Willie du Plessis. Despite the fact that Ireland had fared poorly in some of the non-test preparation matches, they stunned the Boks with impressive mobile forward play and domination of the loose ball. Tobias was essential in creating one of the Bok tries, making an electrifying break that ultimately led to Rob Louw, Tobias’ best friend during his time with the Boks, touching down beyond the try line. South Africa emerged victorious in the hard-fought first test, 23-15 in a game that also served as Wynand Claassen’s debut as Springbok captain. The following week’s match was even tighter, with the home side squeaking by with a 12-10 win in Durban. Tobias had another fine game, but all of the Springbok points came from the boot of Naas Botha, as the Boks escaped with a victory that easily could have gone the other way. Nonetheless, Tobias had caught the eye of scouts from New Zealand, who noted “It … doesn’t matter whether the white Springboks want to play with him or not, because his three brilliant breaks” were all worthy of creating tries. The scout had gone to watch the great Danie Gerber on that day, but had “bad news” for the All Blacks: “Tobias is a much bigger threat than Gerber.”

Tobias emerged as a Bok at a difficult time. Right-wing whites opposed his selection. “Of course there were people who thought that a black man should not be playing for the Springboks,” Tobias would tell a journalist many years later. “I knew there were people who were saying that, but I decided I was going to show South African people that all men are born equal. I wanted to show them that colour doesn’t matter – if you have got the skills then you should play for your country.”

But Tobias also did not attain the heroic status that Chester Williams would achieve as a result of being the sole black player on the post-Apartheid squad that captured South African hearts in winning the 1995 World Cup. Many black South Africans felt that playing for the apartheid regime compromised him. On the controversial New Zealand tour just a few weeks later white anti-apartheid protesters, who might have celebrated Tobias as a pioneer, or at least sympathized with the ways he was caught in a fraught situation, instead disparaged him as an Uncle Tom. Tobias did not appear in any of the tests in New Zealand nor did he play in the peculiar test played in the United States in September of that year. He did appear in several of the non-test matches.

Springbok selectors were well aware of the political implications of Tobias’ selection, and had their own political motivations for choosing him, but he warranted a place on the Bok squad on merit. According to the Sydney Morning Herald, during the New Zealand tour Tobias was “on current form, the second best centre” for the touring Boks and although “foreign critics call him a token black […] there is no question the deceptive and strong inside back is a merit selection in the formerly all-white Springbok side.” Rugby journalist Malcolm Brown asserted, “He is very good. I can vouch for that, having seen him make sizzling runs” during the Barbarians tour of Britain in 1979. Brown was, however, well aware that poor performance would revive the accusations of tokenism. In 1984, when Tobias started at flyhalf against a visiting England squad, Three Lions coach Dick Greenwood told reporters, “Errol Tobias is not coloured. He is pure gold.” This praise meant so much to Tobias that he titled his 2015 memoir “Pure Gold.”

Allister Coetzee’s charges represent the most transformed team South Africa has ever fielded, and while the Boks disappointed in their opening 120 minutes against the Irish visitors it can hardly be blamed on players such as Lwazi Mvovo, who scored a fine try in the first match, and Elton Jantjies, who returned from injury to lead the attack and kicking game after coming off the bench in the first test when Pat Lambie was injured on CJ Stander’s late tackle. Already some are questioning Coetzee. Some absurdly asserted that the one loss indicates that Coetzee’s appointment is a failure driven by transformation politics, with some of the criticisms only slightly muted after the Boks recovered to win the final two matches and the series. Welcome to the pressure cooker, coach!

Transformation is no longer an option in South African sport in general and, because of its symbolic significance, in rugby in particular. Errol Tobias represented perhaps the first step in the long walk toward rugby transformation. It is a walk that South African rugby must continue to take.

A version of this piece was first published in the Weekend Post.