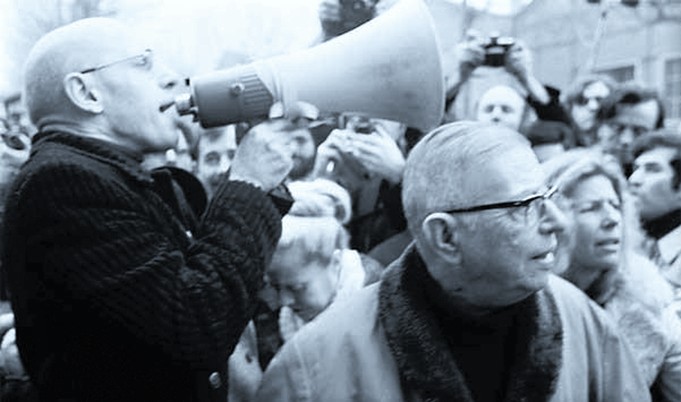 It is hard to overestimate the impact of the French student uprisings of May 1968 on the philosophy of the so-called post-68 generation, that group of politically awakened academics that included, among many others, Gilles Deleuze, Félix Guattari, Michel Foucault, Alain Badiou and Jacques Ranciere. For these thinkers, some of whom were the most highly regarded philosophers in France at the time, this spontaneous rupturing of the everyday, this mass critical uprising against the status quo, compelled them not only to think in new ways about politics, subjectivity, social organisation and change, but also, in most cases, to actively align with the unfolding events and the longer-term political projects that followed them. When I read the work of these theorists today, much of it still containing the most incisive, comprehensive and cutting-edge analyses of contemporary capitalist society and the liberal democratic subject concomitant with it, I recognise in them a profound philosophical integrity— a deep and honest grappling with preconceived opinion and prejudice, with the world in all its messy complexity. A commitment, contra Schopenhauer, to mind the times, not the eternities.

This, in turn, is what draws me to philosophy: its reflexive, experimental, creative approach to the present, its call both to examine and to immerse itself in life. When philosophy ceases to be this then, to my mind, it is no longer worthy of the name philosophy: instead, it is little more than the uncritical defence of the status quo and the philosopher has become less a critical thinker than a policy advocate or functionary.

When I read your latest opinion piece on the student movement I see no philosophy there. Like your other writings on the recent waves of university activism, there is no attempt to engage with either the rich theoretical assemblage that informs it — a powerful mix of black consciousness, decolonization, Pan-Africanism, black feminism, intersectionality, afro-pessimism, radical queer politics, anarchism — or the analyses of the present moment that render this assemblage so apposite, analyses that describe lives riven by structural racism and white supremacy, extreme capitalist inequality, the neoliberalisation of the university and of life in general, the violence of the state, patriarchy, heteronormativity. Instead, your language simply reproduces the dominant mythology invoked in defence of this present moment. You appeal, for example, to the duty to respect the law in a rights-respecting democracy as though the vast majority of South Africans live in anything like a rights-respecting democracy; as though rights are not apportioned and defended according to power and privilege; as though the platitudes and falsehoods of the post-94 rainbow nation are not exactly what the students are challenging. Did the executed miners of Marikana also live in a rights-respecting democracy? Should Abahlali baseMjondolo abide by your abstract social contract when, like for so many, what you term ‘the designated political and legal processes’ have proved to be little more than dangerous illusions, obstructing, at every turn, their pursuit of full and dignified lives?

When you invoke the law as a sacrosanct, transcendent principle, you are doing so disingenuously and in denial of the fact that the law is, like the best philosophical thinking, always provisional and contingent, often evolving in response to challenges from outside of itself. Laws are made by human beings and when they become an affront to life, they should be changed or eradicated. Was the Group Areas Act defensible simply because it was enshrined in law? Where there was no legal process available to change this act, how should those oppressed by it have acted? As rights-bearing equals bound by tacit contract within an ideal liberal democracy? If students today are claiming, often in profoundly affecting and articulate ways, that we still do not live in such an ideal liberal democracy, in Lego-world Rawlsian utopia, do you not have a philosophical responsibility to at least take them seriously and do the difficult work of thinking, really thinking, about their claims?

Perhaps you prefer to live behind a different and more rainbow coloured veil of ignorance, that afforded by academic power and social privilege. This may explain why your invocation of the defence of rights is so striking in its myopia and disconnection — when you urge protesters to respect the rights of others you do not seem to recognise at all that the protesters are also making rights claims, as well as, in some cases, challenging the very foundations of rights discourse. I’m sure I don’t need to remind you that evaluating conflicting natural and legal rights claims within a complex arrangement of interests is a difficult task.

I am especially troubled by the reactionary language your article uses to describe the students as ‘marauding thugs’, ‘perpetrators (of what, exactly?)’ and ‘agents of destruction’. There’s a lot of rhetoric here, but very little considered reflection. Yes, we can be critical of some of the specific tactics that have been deployed, but if we fixate solely on the burning of books without asking what would drive a university student to torch a library then we are not yet worthy of the pursuit of knowledge the library represents. There’s also a clear prejudice embedded in your words, in your fabrication of a stereotyped other or what Slavoj Žižek calls ‘the subject supposed to loot and rape’, although you’ve taken this one step further in your use of the repugnant term ‘useful idiot’.

When you then claim that the university ‘is passing up an opportunity to teach the protesting students an important life lesson, namely about the rule of law’ I wonder what exactly you’re alluding to?

Like the most servile lobbyist, you contrast this demonized group (a group that you imagine to be far smaller than it really is by limiting it only to its most active members and visible actions) to the ‘normal activity’ of the university and the ‘ordinary students’ in order to encourage the university to take a harder path, with ‘teeth’ (as though arrests, beatings, expulsions and the militarization of campuses across the country are somehow still too ‘soft’, a sign of ‘surrender’ in the face of ‘chaos’) while cynically ignoring the fact that it is the normal activity of the university — its ‘actual work’ and how it administers — that has become unliveable for so many. When you then claim that the university ‘is passing up an opportunity to teach the protesting students an important life lesson, namely about the rule of law’ I wonder what exactly you’re alluding to? Having previously read your disturbing and logically incoherent defence of corporal punishment I must admit to being slightly unsettled by your call to ‘teach students a life lesson’, especially as you concede that law is ultimately backed up by force (although, of course, if you applied this salient observation consistently your views on the smooth functioning of our perfect liberal democracy would be rendered untenable, especially if you, like the students, arrived at the conclusion that the law alsoconceals force and power).

You argue that, in the face of all this, the university stands to lose staff and yet, to the extent that the reactionary, incoherent and unphilosophical thinking reflected in what you have written about the student movement is indicative of the calibre of thought of members of staff at UCT and elsewhere, then ‘good riddance’ is certainly the most appropriate response. I would like to think, however, that you are able to do philosophy; that you remain open to challenging your preconceived opinions and prejudice in the philosophical pursuit of a richer and deeper understanding of the world and our place in it. To that end, and in the best style of the analytic tradition, I would like to suggest a thought experiment: as a fellow vegan and supporter of animal rights/liberation, I propose that you reread your article as though its vitriolic outpourings were directed not against students but animal rights activists. Reading such an article, would you not call for an honest, critical engagement with the claims the activists were making? Would you not rally against the ways in which they were stereotyped and marginalised and argue for active solidarity with their cause? Would you be so quick to invoke unassailable principles of law and rights, or to call for a ‘harder’ approach, backed up by force? Would you continue to claim that we live in an ideal liberal democracy?

Sadly, I imagine that you will instead perform the same kinds of logical contortions you do in your manual of men’s rights activism, The Second Sexism, in a desperate attempt to avoid the consequences of real thought so as to defend your comfortable position within the current order of things. If this is so, then perhaps it really is time for you to ‘seek more hospitable work conditions,’ possibly at some elite American ivy league university where I’m sure your socially disconnected, faux-controversial pop-philosophical musings will be welcomed into the navel-gazing fold and you can while away the long days drafting endless footnotes to Plato. This is South Africa, and there is real thinking to be done.

“Philosophy does not serve the State or the Church, who have other concerns. It serves no established power. The use of philosophy is to sadden. A philosophy that saddens no one, that annoys no one, is not a philosophy.” — Gilles Deleuze

“The discovery of truth is prevented more effectively, not by the false appearance things present and which mislead into error, not directly by weakness of the reasoning powers, but by preconceived opinion, by prejudice.” — Arthur Schopenhauer

Aragorn Eloff is an anarchist, animal liberation advocate and independent researcher with a long-standing interest in radical politics and grassroots struggle. He is a member of the bolo'bolo anarchist publishing collective, a co-founder of the Institute for Critical Animal Studies in Africa, a coordinator of the annual Deleuze and Guattari in Africa conference and a collective member of the Edge of Wrong, an experimental music/cultural exchange program between Norway and South Africa. View all posts by Aragorn Eloff →