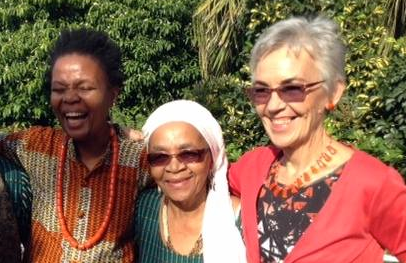 “Khwezi” leaves a legacy like few others. She remains a symbol of courage — the courage to speak truth to power — and of hope and resilience for all women who continue to suffer gender abuse.

Let her brave act (for which she paid dearly) be a rallying call to the many – especially women – who are disempowered by authority and a chauvinist society.

Fezeka Ntsukela Kuzwayo – the person I knew – leaves a gap in the hearts of many.

Born into the struggle against apartheid, losing her adored father, the ANC activist Judson Kuzwayo as a 10-year-old, being constantly uprooted and stateless in exile, she and her mother trod a hard path.

Every time life reached a more even keel, they were then dealt another blow – but the most devastating was that ill-fated night when her protector and ‘malume’(uncle), President Jacob Zuma, took advantage of her.

By seeking justice they became pariahs within the very struggle community she knew as her family.

Harassed, hounded and threatened she sought asylum in the Netherlands and refuge in Tanzania.

Mother and daughter quietly returned to South Africa – Durban – where they lived an underground life. Fezeka feared opening a Facebook page lest the threats began afresh.

As long as she stayed ‘out-of-sight’ and ‘out-of-mind’ they could live a semblance of a normal life. What an indictment on post-apartheid South Africa — certainly not the kind of democracy for which her father had struggled and died. She felt bitter about that.

May he who abused her and those who vilified her, hang their heads in shame.

There was progress on a book about her life. We discussed that the launch would be a good time for her to come out into the open and take her rightful place in society, holding her head up high.

I wonder now if the book will still be written. Her story needs to be told.

Despite the hard knocks, Fezeka remained unbowed. She was fascinating. She lived life to the full. She joined a prestigious Durban choir and although unable to read music – a prerequisite – she learnt the scores by ear and heart.

She was teaching and studying for her education qualifications; she was vegan and looked after her health; she read widely and was well informed, she engaged with the world.

She wrote and she was brutally honest – especially about herself!

She didn’t drive – but that did not stop her going here, there and everywhere!

Although she was socially ‘imprisoned’ her mind was boundless. She was a creative and independent thinker and a cosmopolitan woman – transcending class, culture and race.

Although her life was an emotional roller-coaster, her friendships anchored her. She appreciated the generous support of those who stood by her. She was proud to lend her name to the struggles of the LGBTQI, HIV/Aids and various women’s organisations — notably not the ANC Women’s League – who now opportunistically sing her praises.

Where were they when she most needed them? She was heartened by the silent protest of the four women when president Jacob Zuma rose to speak at the announcement off the local government election results in August this year.

She never sought fame or accolades for herself – but was thankful that her alter-ego/nom-de-guerre – Khwezi – could be a force for good.

Most inspiring, and endearing, was her devotion to her mother – Beauty or ‘Mwalimu’ as she fondly called her.

Growing frail, Fezeka was Beauty’s rock and constant companion – caring for her at every turn. They even slept in the same bed! Beauty’s life was equally rent asunder and has left her haunted by fears of being pried upon.

My heart bleeds for her as she faces life without her rock.

I have one abiding memory. When I asked if taking a stand was worth it, without hesitation she replied: “Oh yes! It was the right thing to do.”

May we take heed and take heart at a time when, more than ever, we must do the right thing.

Hamba kahle Fezeka. I will sorely miss our (almost) daily chats and your bubbling giggles.

In your death, as in your life, you inspire us to pick up your spear!

Louise Colvin — aka Angela Brown — is a former MK operative and comes from a well-known activist family. On hearing stories about the plight of Fezeka and Beauty, Ronnie Kasrils and Colvin sought them out to offer support from within the community that had rejected and neglected them.

Main Photo: The author with Fezeka and and Beauty Kuzwayo — Supplied