For exactly 300 days, they sat: The traumatised. The tortured. The people who knew the dead.

They had watched their family members, lovers, colleagues or comrades being killed. Over and over again. This was in evidence led at the commission of inquiry into the 44 deaths during an unprotected strike at Marikana in August 2012.

Those who sat through the Marikana Commission, with its unrelenting exposition of forensic detail, and a parade of witnesses who refused to tell the truth, endured the violence of their pasts almost every day for two years.

They included Shadrack Mtshamba, a rock-drill operator at Lonmin’s platinum-mining operation in 2012. Mtshamba had seen fellow miners felled by police bullets while attempting to surrender at “scene two”, or the “killing koppie”, where eleven men had been shot in the back, four in the neck or head.

Arrested on August 16 and tortured in police custody Mtshamba still lives with the violence he witnessed and experienced. He will never be the person he was.

Nokuthula Zimbambele’s husband, Thobisile, was shot dead at “scene one”. A year after the massacre her body still convulsed spontaneously when she saw a police officer on the street.

Watching the dead die wounds you. Sometimes irreparably. The killing of a loved one  at Marikana— whether a policemen, a security guard, a striking miner, or a non-striking miner — was the death of someone who may have held you close at night, or sang Christian hymns with you in the kitchen.

The Fees Must Fall barricades and protests have their own wounds.

Police have raided campus residences in the dead of night. They have been arresting students arbitrarily. Many protesting students have been denied bail and remanded in overcrowded awaiting trial cells where physical and psychological violation is an almost certainty.

These are echoes, both of South Africa’s police state past, and it’s present.

Activists from poor communities have been bearing the brunt of this repressive police methodology for decades in our Constitutional democracy.  Colonial modes of policing, once confined to spaces like the shack settlement and historically black universities, have now arrived in the elite universities.

Police have been firing rubber bullets and stun grenades at students without warning. On October 20 the police fired thirteen rubber bullets into the back of Shaeera Kalla, the former Wits University Student Representative Council president.

Violence and militarisation has escalated at campuses across the country. It has not only come from the state.

As authoritarian rhetoric and hyper-masculinist posturing has escalated from within the ranks of protesting students, the idea of violence has been steadily translated into action. On Tuesday protestors at the University of Cape Town attacked a security guard, beating him to the floor with a baton and a rod. They kicked at his prostrate body — a black, working class body.

That evening a building in which students were working was doused with petrol at the University Currently Known as Rhodes. The students smelt the fumes through the air ducts, the alarm was raised before the match was struck, and no one was hurt. The students were black, female and “woke”.

On Thursday students marched to the Union Buildings. They refused to hand over a memorandum to a nameless deputy-director general. They were angry, a stone flew over the perimeter fence and towards the mass of officials and police. Police, without the warning required by National Order Four, which governs their responses and actions in public order policing situations, fired teargas and stun grenades at the students.

According to ENCA’s Jody Jacobs, their commanders attempted to stop officers from firing further teargas and stun grenades — a sure sign that no order from superiors had been given for the shooting of non-lethal force, again as required by police prescripts.

The similarities between what is happening on and around South African campuses and the days leading up to the Marikana massacre are inexorable. As at Marikana, police on campuses seem inept and unable to follow the prescripts that are supposed to govern their action. At times they have conducted themselves like an occupying force.

We have arrived at a moment of real danger. Violence is meted out by both sides causing temperatures and trauma to increase among all involved. A bloody denouement seems almost inevitable.

To search for who threw the first rock, or fired the first rubber bullet is a spurious exercise.

Strikes around the world have shown that there are violent minorities in any mass action — usually spurred on by factors including the political motivation to sharpen efficacy, misinformation about what violence has been meted out to comrades by the state, private interest or other protagonists in the protest, the suffering of an increasing trauma, agent provocateurs, or being subsumed by a group mentality.

In South African strikes police brutality is enabled  by poor training and the consequence of an absence of support to resolve cops’ own trauma during policing. That the state and political leaders’ response to protest — whether in a mass action to access clean water or for no-fee increases — has been to call in the jackboot, gives free reign to police schooled in the repressive public police methods of apartheid. This was clear when the first inter-ministerial committee set up by President Jacob Zuma included the state’s security and police ministers, but not the head of treasury.

A paralysis has gripped South Africa’s executive. Perhaps this is indicative of the administration that President Zuma has built — one where ministers would do the bidding of the president and his cronies, rather than their Constitutional obligation, their jobs.

Police minister Nathi Nhleko appears to have spent more energy sweating in defence of the government funds spent upgrading Zuma’s personal home at Nkandla, than trying to reform a police force that, in 2013/14 had to deal with 1907 protests which turned violent.

It is an indictment on government that Nhleko formed a committee to respond to the policing recommendations made by the Marikana Commission almost a year afterwards — this, in a country where violent strikes grew from 971 in 2010/11 to 1907 in 2013/14 according to the police’s 2015 annual performance report.

Education minister Blade Nzimande has been absent, demonstrably lacking in leadership or the ability to do his job. The vice-chancellors appear oblivious to the severity of the situation on the streets and in their campuses — of what this violence means. 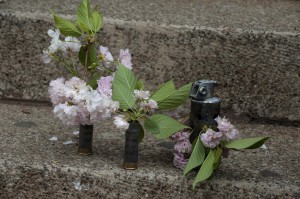 Violence has been begetting violence. It did so at Marikana.

Following the peaceful stay-away at Lonmin on 9 and 10 August 2012 Lonmin security guards drove around the company’s premises and shot at groups of miners indiscriminately.

On 11 August a group of approximately 300 striking miners marched to the National Union of Mineworkers (NUM) office at Lonmin. They were repelled by NUM officials, some of whom had opened fire on the protesters with live ammunition.

According to testimony at the Marikana Commission the striking miners had believed that two of their comrades had been killed. They had, in fact, been injured, and admitted to hospital.

The striking miners armed themselves and marched on the NUM office again the following day. Security guards, who the Marikana Commission found had been insufficiently briefed, armed and protected by Lonmin management, met them en-route. Two security officials, Hassan Fundi and Frans Mabelane, were killed in the confrontation.

That night, as Lonmin reassured workers that their mine was fully operational, much like many universities have told their students, Eric Mabebe, a non-striking miner, was murdered for merely reporting for work — killed for wanting to provide for his family.

On August 13 police were escorting a group of armed protesters who were marching peacefully to the koppie where they had gathered daily.

In a scene reminiscent of the police actions in so many incidents over the past weeks Warrant Officer Daniel Pieter Kuhn fired a tear-gas canister at the miners — without warning or an apparent order from a superior. The miners kept walking at the same pace they had been. Fifteen seconds later Lieutenant Felani Baloyi fired a stun-grenade at the strikers.

The miners kept moving in the same direction, at the same pace. Then, a third stun grenade – which police did not account for at the Marikana Commission – was fired. It exploded, at head height, very close to the faces of the miners leading the march.

Pandemonium and panic broke out as miners started running in different directions, many away from the stun grenades and teargas and back towards the police following them. The police operation was not being led by public order policing specialists but, instead, by regular cops. They had not followed best public policing practise, leaving members in a vulnerable situation. The police started firing live ammunition. There was chaos. Some miners attacked the police.

When the dust settled on the skirmish five people were dead: Warrant officers Sello Lepaaku from Phokeng in the North West and Tsietsi Monene from KwaMhlanga were killed by miners. The miners Semi Jokanisi, Thembelakhe Mati and Phumzile Sokanyile were killed by the police.

Images of the dead policemen were reportedly circulated to cops around the country. And so temperatures increased and the violence escalated.

Julius Langa, a non-striking worker, was killed that night en-route to work. The body of Isiah Twala was found on August 14 with multiple stab-wounds and an animal skull on his chest — marking him out as an alleged spy.

On August 16, the police went tactical in an operation planned by Lieutenant General Duncan Scott. He admitted to the Marikana Commission that he was unaware of Standing Order 262, the prescripts which then governed public order policing, when drawing up the plan.

The operation left 34 men dead. Some undoubtedly murdered by police who gave no explanation for these deaths at the Marikana Commission. Others, it has been suggested, were killed because of the associated trauma some police officers were suffering themselves. Some police officers may have believed they were shooting in self-defence at the miners approaching them at “scene one” — no-one will know since none were called to testify at the commission.

“Never again” is a platitude thrown out glibly when the nation remembers the Marikana massacre, or the days of violence that preceded it. Yet, the elements surrounding the 44 deaths in 2012 are characteristic of the 2016 student protests and its policing.

People died unnecessarily at Marikana. Unless clear and calm leadership — from an absent president, a dithering executive, police leaders, universities’ vice-chancellors and the various leaders of factions in the student movement — is demonstrated now, people will die again.

These deaths will be unnecessary. They will be felt acutely. By lovers and mothers, children and comrades. There will be minimal resolution to the pain and trauma: none of the families at the Marikana Commission, whether those of the security guards, the policemen or the miners killed, have felt that the process which dragged on for two years, gave them the answers they needed for the closure they deserve.

As peace attempts and negotiations break down, South Africa’s history of violence behoves us to do something. Now.

All the actors in this drama need to take full responsibility for their actions. There can be no exercise of power – whether from above or below – for which ethical and political responsibility can be disavowed.

— Niren Tolsi and Paul Botes have spent the past four years researching the Marikana aftermath. Some of their work can be found here.

Main Photograph: The morning of the tombstone unveiling of Andries Ntsenyeho in Sasolburg. Ntsenyeho, a defiant, proud man had been killed by police at “scene one” at Marikana on 16 August 2012 while on an unprotected strike demanding R12 500 — by Paul Botes

Take Two: A tear-gas canister and rubber bullets with flowers at Wits University this week. Violence on South African campuses have escalated in recent weeks in the absence of leadership — by Delwyn Verasamy