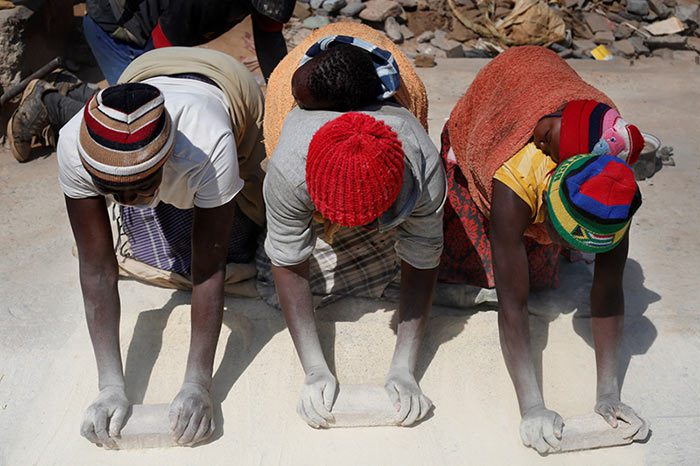 By Zaheera Jinnah and Matthew Wilhelm-Solomon

Grinding rock, on the discarded mines of Johannesburg’s peripheries, is women’s work. The hammering of stone and its crushing into fine silt recalls the rural labour of grinding maize or peanuts into flour or paste for the family meal.

“Grinding stones is like grinding peanut butter,” one of the women working on an illegal “crushing” site near Johannesburg explained recently, “but on stones you use your whole power.”

The gendered division of labour in rural Zimbabwe or Malawi has been transposed onto the urban wilderness of outer Johannesburg.  Most of the women involved in the informal gold trade are foreign nationals, from both urban and rural areas, far from spaces of familial comfort, often forced from their homes when livelihoods became impossible.

Unlike farming, hard as it may be, the women here work with bruised and lacerated hands grinding rock into a fine dust and rubbing Mercury into the muddied soil to extract from it “money” or gold.

“We break and grind the stones into a fine flour so that the money can come out” one of the women explained to us.

“Many men are shy to grind, so the grinding is done by women,” another told us.

Stories of Zama Zamas or artisanal miners– when they do enter the public eye, usually when there are fatal accidents –  are mainly those of men entering the abandoned city shafts to extract rock, in conditions of extreme danger from both natural elements and gangs.

Artisanal, small-scale mining (ASM), or the mining of mineral with rudimentary tools and little regulation or protection, is an informal livelihood strategy for millions across the world. With high levels of urban poverty, in-migration, unemployment and inequality, Johannesburg is no exception.

ASM in Johannesburg is complex and risky. Miners themselves refer to their work not as informal, illegal or even artisanal, but as “work” or “business”. The common words used to describe their activities included: korokoza (“we are doing business” or “we are trying to eke out a living” in Shona). Men who are engaged in artisanal mining are known as Gweja and women as Gwejeleni.

The stories and concerns of the women involved in informal artisanal mining are rarely told. Yet, many are involved in the production of gold at high risk: exposed to dust and toxicity, as well as to the risks of HIV and STDs from the sexual exchanges around the gold-rich soil.

When the men exit the shafts with bags of rocks they often hand them over to women on the “crush” sites.

The surface workforce is typically organised into groups of three-four women who will receive rocks from miners and who will work to extract gold. At one site on Johannesburg’s West Rand, in an informal settlement hidden from street view by large trees, groups of women work in an abandoned house which has been razed to its foundation.

The old concrete slabs provide an ideal surface for women to crush and grind rocks. In a nearby shebeen groups of men walk in and out, talking loudly and laughing as they pass suggestive sexual remarks. The women are organised in small groups, who wither crush rocks in old cement mixers or grind small stones on the floor.

To one side is a makeshift drainage site consisting of pipes connecting levels of pans and water. Here the crushed sand is washed in preparation for the next phase of gold extraction which is the addition of mercury.

The site has a genteel feel to it; quiet and calm beneath the shade of old trees as a gentle breeze nuzzles. Under the shadows of a century-old mine in Johannesburg; it provides a glimmer of hope to an area wrecked by poverty and marginalisation.

Among these stones, with rocks in hand, in connection to this land, the women  extract a living for themselves and their families; some who play and giggle nearby in the dust around them — for the women on the “crush sites” who cannot afford child-care children have to accompany them. Others live with relatives in far-away homes.

In the informal settlements around the shafts the women are also responsible for collecting donations for those who fall ill, or for the funerals of those who die.

Domestic artefacts, sieves or margarine containers, are used in a process which holds extreme dangers. Through the drainage process a fine sand is extracted into which mercury is added. The women use their bare hands to rub the mercury into the silt for the mercury to absorb the fine gold, after which the mercury is squeezed off with a fine cloth and burnt to extract the gold, which is then sold on to dealers.

“The reason why we don’t use gloves is that the gold won’t come out,” a woman explained to us.

Women also prefer to not use any protective equipment or clothing such as gloves or masks as the police use these as evidence of their involvement in “informal mining”, which is a crime in South African many.

Exposure to mercury and its vapours can lead to numerous health problems including neurological disorders and kidney dysfunction, impacts which have been shown in artisanal mining globally, though no study has been conducted in South Africa. Exposure to quartzite dust from grinding can contribute to silicosis.

For their labour the women  keep a portion of the gold-bearing sand as payment or are paid in cash. However, sex is often the price for gold-bearing soil or vhovho.

“Because of vhovho people are dying,” one of the women said, speaking to us with a group in a fast-food restaurant where they felt they could speak more freely and anonymously. “So if that boy is coming from the mine, I will propose that boy. He might be sick with HIV or an STD, but I will propose that boy so that when he comes from the mine he gives the vhovho to me, whether I’m married or not married.”

There are no health and safety programmes targeted specifically for artisanal miners in Johannesburg, nor any specifically targeted at the women who work this trade.

There is a government mobile clinic which visits the nearby housing settlements, but the women claim foreign nationals are often not informed or included, though they can receive treatment at clinics in nearby centres.

The history of gold and it economies in Johannesburg continues into the present where it manifests in black lives being exposed to danger and toxicity. And where women, even though they do not enter the abandoned shafts, still suffer the soil’s threats.

This article draws on on-going research conducted by the Migration & Health Project Southern Africa (MAHP) project based at the African Centre for Migration & Society (ACMS), University of the Witwatersrand, and funded by the Wellcome Trust. Both Zaheera Jinnah and Matthew Wilhelm-Solomon are MAHP researchers.

Main Photo: Women crush gold from stones on a mine just outside Johannesburg — by Alexia Webster and Janet Munakamwe