It would be extremely boring/easy to describe WHATEVERLAND as anti-theatre, or “sheer fun” or “abstract” or anything that denotes that, for its three-year (or maybe only seven minutes) run, director Francesco Nassimbeni has refused to submit to plot, or character, or form, or anything you would usually associated with the word “theatre”. Basically, it would be besides the point to try to untangle from “theatre” whatever this latest Playgroup production is, because, ahem, it is pure theatre. Unadulterated. I’m just going to go right ahead and call it “a romp”. 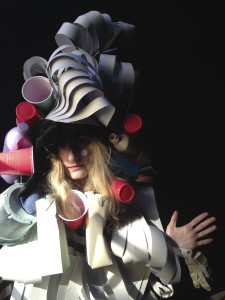 What WHATEVERLAND is, it’s dizzy and maybe scatty, and it exists in another time-space continuum, and it is truly successful because it is impossible to catch in a net.

With their previous productions, How to Be Happy and Everything Is Boring, the Playgroup collective, under Nassimbeni and his always collaborator, the magnificent costumer Richard de Jager, managed to Prestik together a particular kind of world seemingly from the loose bits that kept falling off the internet, conversations overheard while asleep on airplanes, and magnificent hats. WHATEVERLAND is an evolution of that world, and is a perfect continuation from the other productions; the most obvious evolution from the previous work is that there is even less concern with any sort of theme. The experience is witty, sort of dancey, and full of sad piano and “pretentiousness”.

It is indeed high praise to be able to describe a theatre experience as full of pretentiousness in inverted commas. 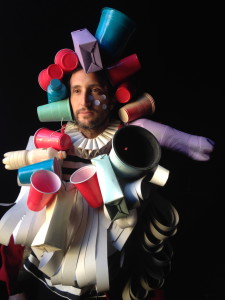 How Playgroup works, in real world terms, is as an experimental performing-arts laboratory that includes collaborators working in disciplines as diverse as architecture, journalism, scriptwriting, graphic design, styling, music-making, performance and dance.

Besides De Jager, WHATEVERLAND’s other collaborators include Heath Nash, who is notorious for his cunning reuse of salvaged things into high-end masterworks (almost as clever as I am for my use of the synonym function in MS Word); and is performed by Deborah Vieyra, Buhle Zulu, Thembe Mahlaba, Edward Berridge and Laura Windvogel, who wander and dance and skip, and Greek chorus, and whisper, and worry about the floor, and over gangplanks, and pantone chart-esque screens conversing through balloons and baroque polystyrene constructions about the nature of, I guess, whatever.

The really monstrous thing the group has managed to do here is to make something that is exciting, and glorious, and funny, and heart-wrenching, and impossible to describe without sounding like an absolute twat. So, instead of torturing you any longer, The Con interviewed Nassimbeni via Facebook about three minutes before the first performance. 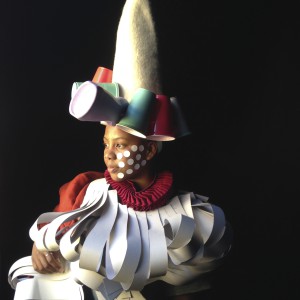 The Con: What is the least playgroup thing you’ve ever done for Playgroup?

TC: Playgroup always has new cast members for every new configuration. Are you the Pied Piper?

FN: Yes, I am like the Pied Piper because I am creepy and lie to children when I see them. I think the reason we don’t often get repeat appearances is because no actor is willing to go through this kind of nonsense twice. Poor me.

TC: Who in Playgroup writes the best jokes?

FN: I do. No, it’s Martin. Maybe Hugh. No, scratch that; Anna’s are definitely the pithiest. It’s because she’s a Swedish nihilist.

TC: Where does a Playgroup project start?

FN: It usually starts with me wishing people would pay more attention to me. Then I coerce friends and colleagues to collaborate in my nonsense. Then I make them take blood oaths. Concurrently, I’ll be introducing little piano riffs, most of which sound like imposter Arvo Pärt. I also salvage bits of old poetry, write new scenes, and generally compose whatever using whatever I have.

TC: Isn’t it a bit pretentious to be so goddamned abstract?

TC: Do you ever think about giving up?

FN: Giving up is all I think about.

FN: I don’t know. Neither does my therapist. I should have gone to med school like my dad suggested.

TC: How many of your performers are trained actors?

FN: In this production, or previous?

TC: I was thinking more philosophically, but in this one. I mean, you usually draw your performers from very different places…

FN: Yes, true. Deborah is. She’s like a proper pro. She can sight-read Shakespeare and make it sound symphonic. And Edward is in that TV series about angels. So there.

FN: Comedy of Errors, because I was in it, and Jenny Stead had roller-skates on. I liked it when they sang Afternoon Delight. I also like it because Matthew Wild directed it, and I reckon he’s clever. I wish they’d do Titus Andronicus, but they won’t, because it’s a horror. What else? 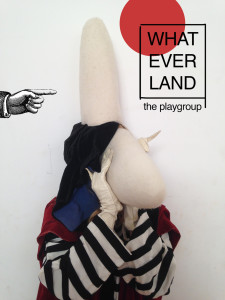 Because of the short duration of the performance, no late-comers will be admitted 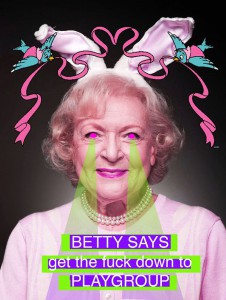 Roger Young likes long walks on the beach, romantic dinners and is a huge fan of Ayn Rand, huge fan. View all posts by Roger Young →