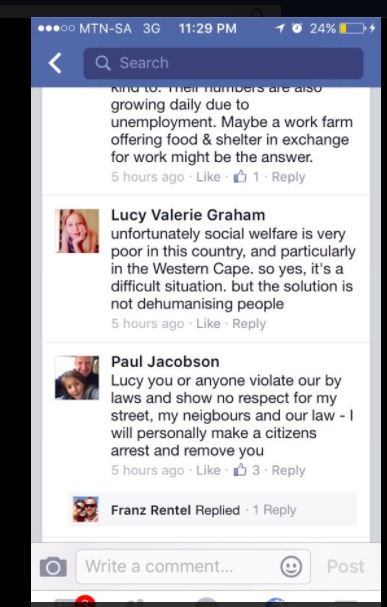 EDITORS NOTE: This piece was originally published in December 2016. In migrating The Con’s archive to the new site much of the content was lost. We are slowly retrieving and rebuilding the archive. If readers and contributors would like to highlight story that have been lost please send a message to The Con’s Facebook page.

Last week (in December 2016), Sea Point DA Ward Councillor, Shayne Ramsay, was widely criticized for making racist, anti-poor remarks with regard to homeless people in Sea Point. She later apologized and the DA distanced itself from her comments. Mmusi Maimane tweeted that “Shayne Ramsay’s comments do not represent the DA, our values and policies. Action is being taken by the relevant structures”. Patricia de Lille added: “The post by Cllr Ramsay was not sanctioned by the City of Cape Town. We are a caring City that believes in helping the homeless”.

That same day, following a trail of comments on social media about the councillor’s statements, I asked to join a closed Facebook group called “Atlantic Seaboard Crime Watch”, where I encountered residents of Sea Point who instigated and condoned Cllr. Ramsay’s statements. Though I have lived in Sea Point for ten years, my request to join the forum was turned down four times. In retrospect, maybe the admins did not like my Facebook cover photo, of Nelson Mandela standing with Fidel Castro, but who knows. Black friends also said they had tried to join but had been rejected. Eventually I wrote to the admins, one of whom let me in.

What I discovered in the dominant voices of this forum was for the most part a white supremacist hate group masquerading as a neighbourhood crime watch forum.

Homeless people were referred to in dehumanizing, genocidal language as “undesirables”. In a video posted in the group, a white male resident harasses homeless people, whom he refers to as “undesirable persons”, by shouting at them and filming them without their consent. Because they shout back, he claims in the title of his video that he is a victim of “harassment”.

Comments also suggested sending homeless people to “work farms”, like criminals in the days of apartheid.

There was a great deal of hysteria and outrage about rubbish bins becoming places where homeless people could look for food. Indeed, Cllr. Ramsay’s shameful statements about Sea Point bins as “buffet tables” for “vagrants” seem to come directly from the people in this forum, who used similar words and expressed similar sentiments. In fact, the day before Ramsay’s statements about homeless people as criminal bin raiders were made, one of the members of the closed group met with Ramsay about his concerns and then assured fellow Sea Point residents that she is “a lady of action”.

The outrage about residents’ bins becoming places where homeless people could find a few scraps of food was accompanied by paranoia about bins being “hiding places” for criminals, though personally I have never heard of criminals jumping of bins.

Individuals on the forum were happy to voice their support for Cllr. Ramsay’s statements, and the hash-tag #handsoffCllrRamsay was used.

Posts also seemed to imply that “the march against grime” would go ahead, even though Cllr Ramsay had cancelled the planned “march” to evict homeless people from the Sea Point area.

In response to these calls for the march to continue, I stated that I would be there at the same place and time, and would peacefully protest against anyone illegally harassing homeless people. I also began to call out racism and bigotry in the Facebook group, and posted an article by Pierre de Vos, which states the Constitutional rights of poor and homeless people. For this, I was called a “bitch”, stalked online, threatened with a “citizen’s arrest”, and then finally threatened with assault.

A white male asked where I lived so that he come and sort me out in a “streetwise” manner – on a forum to promote safety and security, during 16 days of activism in South Africa for No Violence Against Women and Children.

He was cheered on by a woman, who praised him as “a mensch” for what he was doing.

When I complained to the forum admins about the threat of gender violence, I was told by the woman admin of the forum to “grow up”.

I was then thrown out of the forum by the admins, while the man who threatened me remained in this closed group, where he carried on making negative statements about me as a woman.

Communicating with friends from a various suburbs, from the Western Cape to Gauteng, I was amazed that we all had similar experiences with online neighbourhood watch forums. Racism, racial profiling, harassment of homeless people, hatred of the poor, and threats against dissenting voices are the order of the day in these closed groups. This is despite the fact that local laws governing neighbourhood watch organisations explicitly prohibit racism, discrimination, and taking the law into one’s own hands.

Clearly not everyone in the “Atlantic Seaboard Crime Watch” forum is a bigot. For instance, a variety of views were aired in the forum regarding proposed social housing at the Tafelberg site in Sea Point. But one wonders if residents of social housing would even be allowed into such closed groups by the admins. Moreover, it became blatantly apparent to me that if anyone in such groups questions the dominant white supremacist views, they are intimidated by white males, and/or thrown out by admins, and bigotry is emboldened.

One neighbourhood watch closed group in Cape Town posted pictures of residents, dressed in camo and apparently armed with guns, harassing a homeless man, demolishing meager structures of shelter, and proudly confiscating the blankets and mattresses of homeless people.

In Sea Point, harassment of the homeless in the post-apartheid era ramped up during the period when J.P. Smith was Ward Councillor. The film Sea Point Days (2009), directed by Francois Verster, contains visual evidence of Smith and his team harassing and evicting homeless people

For his “success” in “cleaning up” Sea Point, Smith was promoted to a paid position in the Cape Town City Council. He is now the City’s Mayoral Committee Member for Safety and Security, where he advocates strongly for neighbourhood watch organisations. While he has clearly excelled at cracking down on homeless people, he has been criticized as ineffectual in dealing with hardcore crime, by Western Cape Provincial Secretary of Cosatu, Tony Ehrenreich, who claims that under Smith Cape Town “is seeing more killings… and [t]his is because instead of developing a strategic plan to deal with the crime, [Smith] runs from press conference to press conference, to confuse Capetonians.”

Smith also seems to have had a major hand in the anti-vagrancy by-laws that were passed in Cape Town in 2007. As opposed to the Constitution of South Africa and national law, these by-laws attempt to make it illegal for homeless people to create any form of shelter, and to make it legal for their few belongings, including blankets, to be confiscated.

Police are then placed in the difficult position of being pressured by residents and Ward Councillors to enforce by-laws that are unconstitutional.

Neighbourhood watch organisations are not just a problem in South Africa. In the United States, they have been linked to bullying, stalking, vigilantism and racial profiling. Spreading paranoia, they have become systems of gang-surveillance whereby citizens are entitled to spy on each other for “suspicious activity”, including “anti-patriotism.”

If neighbourhood watch organisations are places for bigotry, bullying, racial-profiling, anti-poor hatred, and threats of gender violence to flourish, they have no place in a democratic South Africa.

If they can become open and transparent spaces were all voices are heard, and where creative, humane solutions to problems such as homelessness can be aired – then and only then do they have a role to play in addressing crime in a Constitutional Republic.

EDITORS NOTE: This piece was originally published in December 2016. In migrating The Con’s archive to the new site much of the content was lost. We are slowly retrieving and rebuilding the archive. If readers and contributors would like to highlight story that have been lost please send a message to The Con’s Facebook page.

View all posts by admin →